Prize fighting proved very popular during the 18th and 19th centuries but the law changed in 1882 and the sport banned, so future fights took place illegally.

Fred Scott who farmed at Meresborough in the latter part of the 19th century became a fan of prize fighting and staged the last ever bare knuckle fight to take place in Kent with the assistance of his brother Robert. On May 18th 1888 he arranged a fight at his farm between two well-known London fighters Alec Roberts from Shoreditch and Jem Hayes from Paddington, fought under London prize ring rules for £400 a side. Because the fight was illegal it had to be staged secretly in the early hours of the morning.

E P Fay of ‘The Clarion,’ a journalist present at the fight, went to Rainham from London to report on the event. While travelling on the midnight Dover Mail train he met famous prize fight referee Mr Fisher with two other gentlemen, all on their way to the same event. When he got off the train at Chatham he then recognised famous bookmaker and racehorse owner Bobby Habakkuk from London with several well-connected gentlemen who were also going to the fight. Although they all behaved as if they did not know each other they got into four closed carriages in small groups outside Chatham railway station and set off for Rainham at 1-15 am. An estimated eight horse drawn carriages occupied by London prize fight fans travelled to Meresborough before the fight took place and, according to E P Fay one spectator walked from London.

When E P Fay and accompanying gentlemen arrived at Meresborough they were met by farmer Fred Scott who escorted them to his big barn and up a ladder to the first floor where two long tables laden with huge amounts of beef, veal, mutton, vegetables and barrels of Kentish ale were placed.

A problem immediately arose when Rainham police-constable Barranger arrived at the farm to find out what was going on. He had been awakened by the clattering of the horse drawn coaches passing through Rainham and followed them to Meresborough. Thinking quickly Fred Scott informed Barranger that a smoking concert was taking place and invited him to have a drink in the kitchen. Fred Scott then supplied him with brandy and ale and this caused him to become intoxicated and eventually fall asleep on the floor. Meanwhile, as more people arrived they were taken to the barn where they ate, drank, sang and were then entertained by a famous London actor who even recited part of Shakespeare’s ‘The Merchant of Venice.’

At about 4 am all the guests were led to a three cornered field at Fardon’s Corner situated about ten minutes walking distance from the farmhouse. Stakes were knocked into the ground then ropes attached to make a fighting ring. With the local police-constable still asleep and the spectators waiting in expectation the two fighters arrived. Alec Roberts, the champion of his weight weighing about ten stone, had never been defeated. His brother acted as his second in his corner. Jem Hayes was described as being broader and a little heavier. A man named Dan McGannon acted as his second.

At 4-20 am the fighters entered the ring then, according to Fay, they shook hands as they sternly stared at each other before beginning the fight on a perfect early May morning. Fay described the beginning of the fight:

‘For fully a minute the men circled round, viewing each other’s points with the stealthy step of the tiger about to spring; and then Roberts darted at his man, and, with his left arm going out like a flash, smote Hayes on the jawbone…’

This signalled a change in the atmosphere which Fay described:

‘The supporters of the rival combatants screamed and yelled like frantic demons.’

After the first two rounds Hayes took a strong lead by rushing his opponent and targeting his body with some strong blows although Roberts replied with some good left hooks. After 20 rounds Hayes still looked strong but then everything dramatically changed when he swung a powerful right punch but instead of hitting Roberts he struck a stake which disabled his right arm for the remainder of the fight, but he incredibly fought on for a further 44 rounds.

During the last 30 minutes Fay described the fight as a test of endurance with the two fighters becoming almost totally exhausted so that they could barely throw a punch. Ultimately, Roberts proved to be the fitter of the two as Hayes lay down on the floor in the 64th round unable to rise to his feet. Roberts stood over him in a dazed condition totally exhausted as the winner.

After the contest which had lasted for 1 hour and 47 minutes, the police, who suspected that a fight had taken place, visited Fred Scott’s farm to investigate but they were unable to find any evidence as the spectators had left, the rope had been hidden and the stakes chopped into small pieces.

Although Alec Roberts and most of the spectators had left for London on the early morning train from Chatham, defeated fighter Jem Hayes stayed in bed for the whole of the following day and had to wait until night to travel by train back to London heavily disguised and escorted by friends. This was because the police were watching all the local railway stations for people suspected of attending the fight.

According to ‘The Clarion’ Rainham police-constable Barranger was suspended from duty then tried in Chatham by a panel of police superintendents and discharged from the force. Some spectators who had attended the fight raised a substantial amount of money for him as compensation after they had learnt about his fate.

In July 1888 Fred Scott, the fighters and fight organisers were summoned to Sittingbourne Petty Sessions and charged with causing a riot and committing assault. They were then sent for trial at the East Kent Quarter Sessions in Canterbury in October 1888 and bound over to keep the peace after a lengthy trial.

In Rainham there were mixed views about what had taken place. On the Sunday after the fight Reverend Charles Cobb preached a sermon against the event in St Margaret’s Church. Police-constable Barranger received local sympathy while some younger residents said they would have ‘given a fiver’ to have watched the fight. The East Kent Gazette of May 19th 1888 commented:

‘It certainly seems extraordinary that a body of men should be allowed to come to Chatham and bring off a fight under the very noses of the county police, without let or hindrance.’

Finally, prize fighting declined in England and gave way to the rise and popularity of boxing by the mid-1890s. 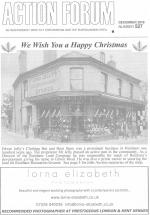 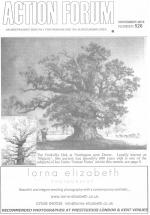 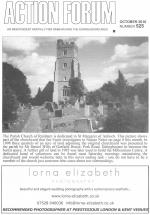 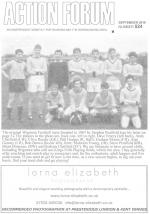 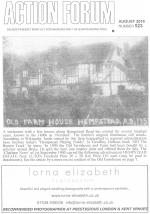 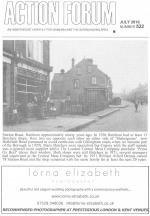 Action Forum magazine from April 2011. Click image to view the PDF of the magazine.   ...

Action Forum magazine from April 2010. Click image to view the PDF of the magazine. Cover pho...

Action Forum magazine from December 2008. Click image to view the PDF of the magazine.  ...

Action Forum magazine from May 2011. Click image to view the PDF of the magazine. Note: File is...

Action Forum magazine from September 2008. Click image to view the PDF of the magazine. &nbsp...

Action Forum magazine from  October 2003. Click image to view the PDF of the magazine. C...

Action Forum magazine from May 2018.   Click to view (18Mb file) Cover photo of Memorial to Britis...